My Story ~ An interview with Katy Lewis 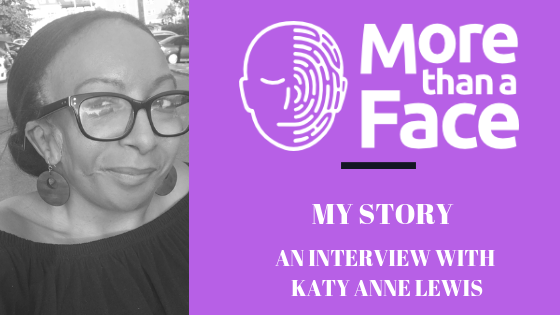 Thanks very much for agreeing to be interviewed for the website. Can you start by letting the readers know your name, age and where you’re based please?

Hi, my name is Katy Anne Lewis. I am 34 years of age and I am based in East London.

Great. Thanks Katy. Everyone interviewed on the site has some connection with facial disfigurement / visible difference. Can I ask first, which term you use (if any) and what connection you have ?

I was born with Craniofacial Microsomia, which is a condition where one or both sides of the face is underdeveloped. Another name for this, which I use is called ‘Goldenhar Syndrome’ and I use the term facial disfigurement. 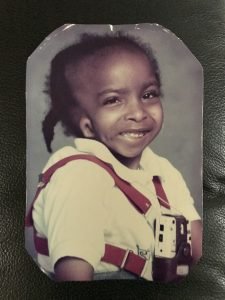 So how did the syndrome affect you as you were growing up? Did you ever feel ‘different’ to other kids or were you always accepted?

When I was really young, I knew I was different but didn’t really think anything of it at first. I didn’t think it was a problem. At nursery, which was a school for children who were hearing impaired or were deaf, I was treated the same as everyone else. It was the same at primary school even though it was a mainstream school.

And do you think there’s anything in particular that helped you feel accepted and included at school? Were staff good or do you think that the children just accepted you naturally?

I can only remember one time, a particular boy in my classroom at primary school, made fun of my undeveloped ear by squeezing his ear down together to look like mine. I told my teacher and she told him off, after that he didn’t do it again.
I had two best friends at the time who were hearing impaired like me so I didn’t feel like I was on my own, which was nice. The staff treated me well and so did the children. They were all accepting. 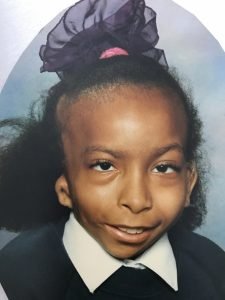 Fantastic. That’s so brilliant to hear. And was it the same at high school ?

Secondary school was the same, don’t remember being made fun off but there was a point where I kind of felt excluded by certain group of friends and because of that, I started to feel insecure and started questioning my self-image, my disability etc…but thankfully I made new friends who were really wonderful and accepting.

I do think that’s a part of teenage life too. I certainly see it in my son and the teenagers I teach. So your experience of life with a facial disfigurement has largely been positive?

It was kind of positive when I was at nursery, primary school and a little bit at secondary school, it wasn’t positive when I face the world; people staring at me, laughing at me when I was out shopping, out socialising with my friends or with my family. Even when I used public transports I would get stared at. It would really frustrate me to a point where I hated the way I looked. My self-esteem became really low and I suffered from anxiety

Do you feel that impacted you harder in a way because you’d had so much support and acceptance as you were growing up? Did it come as a shock that people could be so horrible?

Yes, it did. I received so much love and acceptance, that I was able to be myself and love me for me no matter what I looked like so when I received so much negativity from people, it was too much for me to handle and I that just couldn’t understood why they would be so unkind and ignorant. 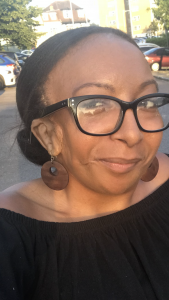 I bet. How did you deal with that? Did you talk to others about how you were feeling?

It was hard to deal with it at first. It took me a very long time to overcome it all because my self-esteem was really low. When I got like that, I would talk to my mum and my sister about my feelings and they would give me some great advice. I am a Christian so when I struggled, I would pray for strength to keep me going.

It’s great that you have strategies. I know you mentioned having anxiety. Did you ever need to visit the GP at all or did you feel that talking through it helped enough?

I haven’t been to see a GP for my anxiety but I have been to see a counsellor (Cognitive Behavioural Therapy) and I felt that has helped me. I am connected to a charity called Changing Faces, which also helped me to accept & love my visible differences.

I think groups for people with visible differences, where we can all get together and socialise. Sharing our stories with each other, be a support for one another so that they don’t feel alone. I believe that can help boost their self-confidence, which could then help them deal with the reactions from other people in a positive way.

And if you could go back to your younger self in the midst of all that love and acceptance what would you say? Would you prepare yourself for what was to come? 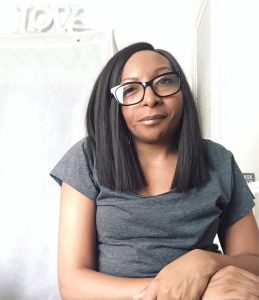 Gorgeous. Thanks so much! I know you’re on social media if people wanted to connect with you where should they go?

Thank you so much for having me! If people wanted to connect with me, they find me on Instagram, which is @katyannejessica

Marvellous!! Thanks loads for your time and sharing your life with us

You are so welcome Charlie.