My Story ~ An interview with Rory McGuire 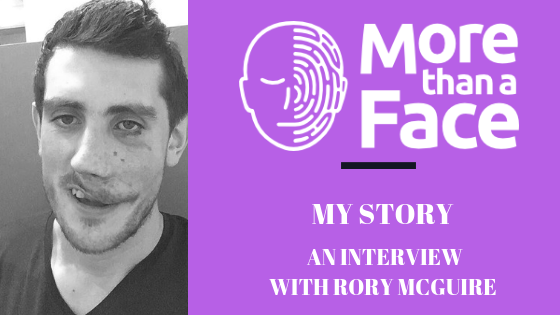 Behind the scenes ~ I recently read an article in the Telegraph about their findings from a study which revealed that most people would not intervene if they saw someone with a facial disfigurement being abused. Rory McGuire had chatted to the reporter as a case study and so I began to follow him on Instagram and invited him to share his story with us…

Thanks very much for agreeing to be interviewed for the website. Can you start by letting the readers know your name, age and where you’re based please ?

My name is Rory McGuire, I’m 25 years old and I’m based in Kent just south of London

Great. Thanks Rory. Everyone interviewed on the site has some connection with facial disfigurement/ visible difference. Can I first ask which term (if any) you tend to use and what connection you have?

I tend to use “visible difference” as it seems like a kind way of referring to people who have some sort of visible “difference” rather than words such as “disfigured” which sometimes have negative connotations. 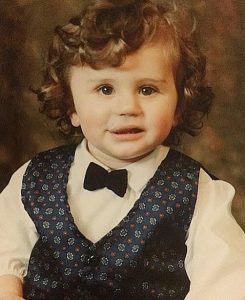 I was born with a venous malformation birthmark on my upper lip and right cheek, and I’ve had around 20 operations to reduce the size of it.

Yes, I can see how it sounds more positive to say ‘visible difference’. As children, we just tend to accept our reflections and each other around us. Was there a certain time when you began to feel different, or that others saw you differently?

I think the first time that I truly realised that I look a little “different” was on my first day of primary school when I was 4 years old. 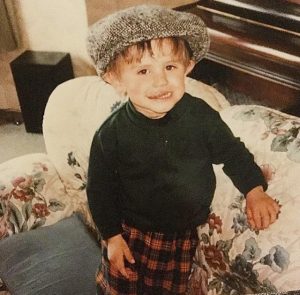 Those early exposures to others opinions can be really hard. Do you remember what day to day life was like at school in the beginning? Did teachers brush your differences under the carpet and just encourage to you play with others or was there ever anything proactive done to explain your differences and answer questions?

In the beginning ,my classmates were really curious about me but once I told them what my “difference” is they began to accept me, although there were instances of name calling and bullying

As for the teachers I can’t say anything bad about them, they always included me with the rest of the class and encouraged other children to befriend me, but there was never a class conversation or anything like that to explain my “difference”

Do you think that would have made a difference at all?

Maybe somewhat, but as it didn’t happen, I’m not sure if it would’ve helped or not. I don’t think it would have hurt though.

Yes, I always think proactive is better than reactive but that’s always been my style as both a mother and a primary school teacher. Did you find a difference between the way you were treated by your peers in primary and high school?

I found that in general, in secondary school the insulting comments etc that I was on the receiving end of were more offensive than they were in primary school 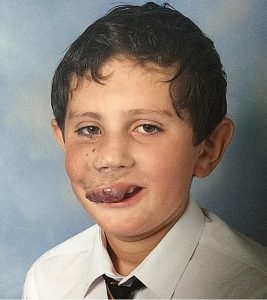 How did you deal with those comments and did you have a good support network of friends around you to help? Mental health is talked about so much more than it was years ago and it must have been incredibly hard to deal with such incidents

It was very hard to deal with the adversity and prejudice that I endured. I actually used to bottle everything up which just made me feel even more low so I wish that I had opened up more about what was going on at the time, but my family and friends have always been a great support for me and they continue to be

Did you know now why you chose to bottle things up rather than talk? (often we find the answers in hindsight)

I didn’t want anyone to feel sorry for me, but looking back on it if I had opened up more then I would have come “out of my shell” earlier than I did

And I guess that links to a question I usually ask later which is that if you could go back in time and give your younger self some advice, what would it be?

Great advice. You mentioned that you have now ‘come out of your shell’ in life and that you have had 20 operations. Are the two things related or do you feel that you would have found more confidence in time any way?

Two main things have helped with me coming out of my shell: 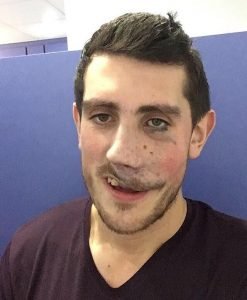 Fantastic. And are you getting support face to face as well as online or do you still think there’s a way to go in raising awareness yet?

Yes a lot of people show me support in person too, but there’s definitely a lot more awareness that can be raised to help the publics perceptions of those who look a little “different”

What would your advice be, based on your own experiences for parents, teachers and the general public?

To never judge a book by its cover

I totally agree. I saw you received an award recently. Can you explain what it was for and what it meant to you?

I won a “Young Upstander of the Year” award at the 2018 No2H8Crime Awards which is an award which is awarded to “young people between the ages 13 and 25 who have stood up against hate crime and prejudice at their University/School or within their local community.” It means a lot to have won and the night that I received the award is one of the proudest moments of my life so far. It feels like a real “victory” to win such an award after experiencing so many years of prejudice

And rightly so! You’re building quite the social media following now and I know that you’re working with the fantastic charity Changing Faces, so what’s next for you? What do you have planned for 2019?

Thank you, I plan to do a lot more campaign and charity work in 2019, with more public speaking and I will also be going to more events to spread the message that nobody should ever be prejudiced

Fantastic goals for the year and you’re a great example of achievement and success. If people want to follow your journey, where would be the best place?

Thank you I really appreciate it

Instagram is the social media page that I’m most active on and my name on there is @VMRory1993 or you can just search Rory McGuire and I should appear. I’m also on Facebook as Rory McGuire and LinkedIn as Rory William McGuire.

Many thanks for your time Rory. Wishing you a fantastic year ahead!